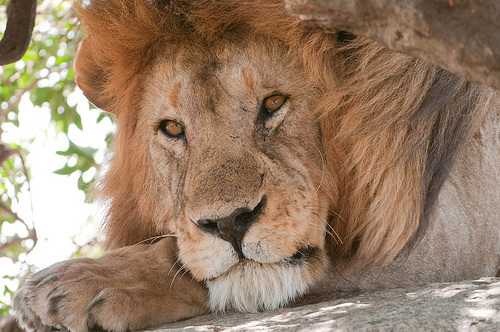 Nadia's piece “Walking with lions” was selected for the Readers’ Africa competition of the local Sunday newspaper.
share

MY daughter has wrapped a scarf around her head as if to hold her brains together. She is writing an essay for the Politics course she is taking this year, her first year at university.

I glance down to the bottom of the screen – 780 words. “How long is this supposed to be?”

“Three hundred words,” she replies, winding the scarf more tightly. “Can you take some of the words away?” This is nothing new; the day before it was an Economics essay.

I don’t have a clue what she is writing about. This is a far cry from helping her with a school essay. She has always waffled on and on. She seems to think that I can wave a wand and, “Voila!” Half the words march off into cyberspace.

Being the daughter of a school teacher, I learned to cross my t’s and dot my i’s at an early age. Lynne Truss has me in raptures of delight. So when my daughter makes her appeal, my fingers curl over the keyboard, ready to make magic. It’s good practice for being an editor, but it’s a writer that I want to be.

Writing is a talent like music or dancing and, like I keep telling my son, if he doesn’t practise his music, he’s never going to be any good. So I have to practice my writing, and prepare for my moment on the stage.

I have always enjoyed languages although I didn’t study them beyond high school. When I felt that I needed to hone my skills, the Magazine Journalism Course provided the polish. I have learned how to pitch the query letter, how to sell myself without sounding desperate and how to be patient and wait for the busy editor to get back to me. “Wait six weeks and then make a polite enquiry,” they say and I count the days as six weeks plus six weeks goes by and nothing happens. And then I do it all over again and hope that this time my attention-grabbing introduction will do just that.

And then one day it did. We had been on an adventure to Victoria Falls for our twentieth wedding anniversary. Feeling the need to mark the occasion, I plucked up the courage and not only jumped into a pool on the edge of the Falls, but also literally grabbed the cat by the tail and went for a wildlife walk. “Walking with lions”  – the story I penned about this experience – seemed just right for the Readers’ Africa competition of the local Sunday newspaper.

I sent it off, expecting little (Surely lots of people enter this competition?) and tried to forget about it. Then the phone call came. “We like your story. Can you send us a picture to go with it?”  A little glow settled all over me – somebody liked what I wrote. “We’ll publish it in three weeks time.”

I read the piece again. Perhaps I should have said more about the lions…or the Falls or… Relax. He said that they would publish it. What if someone else sends in something better? He didn’t give me any guarantees. He could change his mind. And on and on the doubts went. I didn’t dare tell anyone unless this would jinx it somehow.

When I couldn’t keep it to myself any longer, I told my daughter. I waited. What if no one reads it because they don’t read the Travel section?  So I told one or two other people. Three long weeks later the Sunday newspapers arrived. And there it was, just like he said it would be. My story. My name. My photograph. I sat down to read it even though I knew every word by heart.

“Hey guys, come and take a look!” I rallied the family. “I’m a writer now: my name is in print. Other people will read it. Oh, my gosh! Other people are going to read it. What will they think?”

That piece was my first bit of paid writing. Maybe that makes me a proper writer now. I haven’t spent the money yet. I need to buy something that in a few years’ time I will hold up and say, “Look what I bought with my first earnings as a writer.”

Afterwards my husband said, “You should just write.” The success has given me a licence. What did you do today? I wrote. I joined a writers’ support group.  We are all busy with a project, a little apologetic about our aspirations. I can’t believe how critical everyone is of what they have written. Most of it sounds almost ready for publication to my ears. But, you need a thick skin in this writing business.

I know how many publishers rejected Jeffrey Archer’s first book (14). I have read Stephen King’s book On Writing and followed Julia Cameron on a journey to unlock my creativity. If another person tells me about JK Rowling’s difficult start (and look at her now) I am going to scream. I get it, writing is not for sissies! I started writing a blog to practise putting a little bit out there, to build up tolerance. A few people read it. Sometimes they even leave a comment.

I have learned to switch off the editorial in my head. I bash away at the keyboard, ignore the squiggly red and green lines flashing warnings, and control the urge to justify the margins or change the font. And then I let it sit. Later I go back and let the editor loose. I don’t mind pressing the delete button on a whole paragraph – rather something to correct or chuck out than to stare at the blank page. And then it slowly takes shape into something that I am reasonably proud of. Well, until I show it to someone.  I watch their faces trying to guess what they are thinking. Why do I open myself up like this? What was I thinking?

But here I am, doing it all over again.

Nadia Kamies is an emerging writer and a graduate of the Magazine Journalism Course at the Writers’ College. Nadia’s first story, called  “Walking with lions”, was published as part of the Readers’ Africa competition of the local Sunday newspaper. Nadia won the June 2012 My Writing Journey Competition with her story ‘Writing is not for Sissies!’ 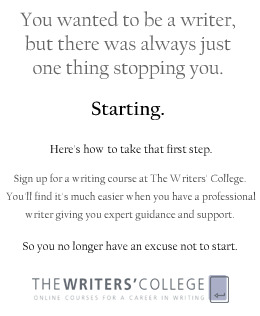