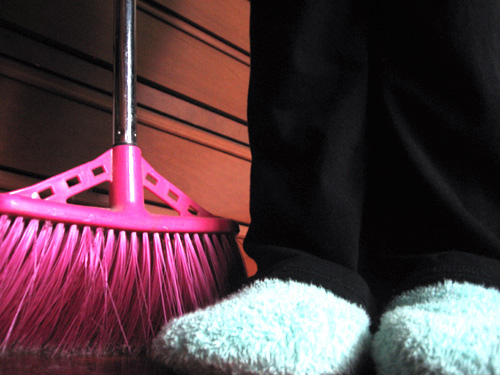 I liken my passion for writing with the exuberant style in which I tackle housework. I’ll admit that ultimately writing gives me more joy than the latter, but there is also something very satisfying about an empty laundry basket.

The trouble with this comparison is that I only have room in my life for one at a time. This can lead to some serious inner tension and often I feel as if the two are fighting for my attention. If I were a dishonest man then writing would be my loving wife and cleaning would be my mistress, always in my ear about how I should forget my beloved and spend more time with her.

Unfortunately as soon as I even smell a hint of writers block coming on then the mistress’ voice becomes louder and more threatening until eventually I drop to my knees and surrender…to scrubbing the floor. It’s like she knows when I am weak and pounces. I’ll be tap, tap, tapping away at the computer until the gaps between taps start to lengthen and I find myself staring at the dust on the window ledges. Then BAM! The dirt is gone; my window ledges outshone only by the glaring white of the empty document open on the computer screen.

Don’t think I haven’t tried being honest with them. I just can’t face having them both at once- not to say I haven’t thought about it. It would never work though. Once my mind is set on either writing or housework then I am fully devoted to the task at hand. Keeping the balance however, has been proving rather tricky of late.

As keeping a mistress is easier than pleasing a wife, housework is easier for me to get around to than writing. All a mistress needs is a nice pair of earrings and a word of praise from time to time. Much like the kitchen needs a good Spray’nWipe every few days. The wife on the other hand, has far more complex needs. You can never be sure that she is actually fine when she says she is. I compare this to a piece of writing that at first glance seems okay but on the second read through reveals more grammatical errors than a text message.

Favouring the easy route recently has ensured that I have a very clean apartment- aside that is, from the dust gathered on top of my closed computer. Never is the saying, ‘out of sight, out of mind’ more true than when one is trying to procrastinate. Luckily for my mistress, it’s a lot harder to hide a pile of dirty dishes than it is to slip a laptop under the bed.

Perhaps this is why so many famed writers favour the ‘disheveled’ look. Unlike me, yet to make a living from writing, these characters have ignored the voices telling them to put the washing on, mop the floors, shower. If I did the same then perhaps I too would have a couple of Pulitzer Prize winning novels under my belt. Alas, I can’t shake the habit of keeping myself and my surroundings clean.

Don’t get me wrong, I do love to write- just as a cheating husband often still loves his wife. The real issue plaguing the relationship always comes down to the ‘O’ word: Obligation.

As soon as I feel obligated to put pen to paper my mind wanders. I start to think dirty thoughts like ‘My, the shower is dirty, better get cleaning’ or ‘Is that a dirty sock on the floor? Must be time to put a wash on’ and so on. Sick really.

I can probably put this affliction back on my upbringing somehow. Isn’t that what so many men do? Reason that their failure to maintain a monogamous relationship is purely because their father set a bad example for them as a child? Going by this rule then the blame for my inner turmoil can sit squarely on my mother’s shoulders.

The woman doesn’t stop. No sooner has a glass left my lips before she has whipped it away, into the dishwasher before I can set it down and create a watermark on the table. I never thought anything of her two-loads-of-laundry-a-day policy. That is until I moved out into the real world.

Clearly I still carry these scars from childhood. If only I found a half written article as distressing as a pile of unfolded shirts. Then who knows what I could have written by now. I think I can finally admit that housework is my vice and I believe it is stopping me from reaching my true writer’s potential. Perhaps I need to find myself a house husband. Then I won’t have any excuses OR a needy mistress to attend to. They do seem to be rather rare beings though. Maybe I should try some sort of rehabilitation centre; the Martha Stewart clinic?

One thing is for sure though, I am slowly but surely on the road to recovery right now, as you read this. In fact we’re getting quite close to the finish now, meaning that I have actually completed a writing task! I’m ashamed to say that this has not been the case for quite some time but proud to recognise that this is a breakthrough. I guess all it took was a little honesty.

And finally on that note, I probably should admit that this was written only after two loads of dishes, one batch of home cooked muesli, one trip to the supermarket and a thorough vacuuming session.

Congratulations to Amanda Bidwell, the winner for our February 2012 My Writing Journey Competition.

The next My Writing Journey Competition closes on 30 June 2012.

Send your 1000-word story to Nichola Meyer at nichola@nzwriterscollege.co.nz. Read more about the My Writing Journey Competition here.

We offer no-nonsense, practical, challenging training for writers who are serious about getting published. We use award-winning, professional writers as our tutors who provide expert feedback for every line you write.