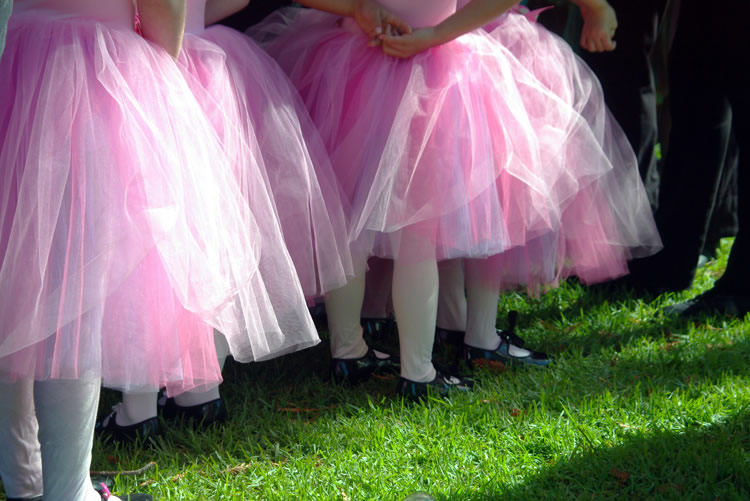 I would say that my venture into the world of words started thanks to Tchaikovsky. Had the Russian master not composed his first epic ballet, I probably would never have realised that my forte was not within the realm of hand-eye coordination.

It all began when I was seven. I was in Miss Miller’s level one class and we twirled around in our pink tutus every Tuesday and Friday afternoon. My mom and Auntie Susan took turns driving the neighbourhood girls, and one boy, to class. All of us would either squash into the back of my mother’s sensible family station wagon (Tuesdays) or we’d sit on the mattress under the canopy of Auntie Susan’s white Nissan compact pickup (Fridays). The latter was the dreaded option as what was meant to be a soft surface underneath us was actually once Fluffy the dog’s outside resting area. The smell, occasional tick bite and yellow-brown stains kept his memory alive. For all of us.

Another facet of the feared Friday journey was that whoever managed that particular transportation duty was also responsible for our lunch. Auntie Susan was a real aficionado of the good old boiled egg sandwich. She stood alone in her appreciation for them. But the full Tupperware container returned week after week didn’t seem to convey the message. She just took it as us not being hungry. Again.

Now back to Tchaikovsky. On one particular Tuesday, we were told that during the next lesson Miss Miller would announce the theme of our upcoming annual ballet concert. Roles would also be allocated. The rest of the class was ecstatic about the news but, in truth, I didn’t even know there was a production planned for the end of the year. On the trip home, I fell in with the group’s solemn, tense, pondering silence. I was actually far more fixated on the half-eaten granadilla sorbet cone I had left in the freezer at home, hoping my sister hadn’t discovered it. But I pretended to be pensive all the same.

Our neighbourhood gang avoided each other for most of the week. And the tension around the annual concert spilled into our home too. Mom told me she’d heard that some of my friends were cracking under the suspense of Miss Miller’s pending role decisions.

“I heard Rupert threatened to move to Russia should Miss Miller not appreciate his worth,” my sister announced at dinner.

“He’s quite a dramatic chap, isn’t he? How do you feel about this whole concert thingy, Suzy?” My dad asked.

“I’m okay, Dad. I don’t really think about it that much.”

“That’s my girl! No point in getting yourself all worked up about a silly dance competition.”

“Daniel! This is a very meaningful event in your daughter’s life and I’m sure she’ll do everything in her power to make us proud.”

“I don’t question that for a second.”

The heavy family mood remained for most of the week until Friday when Auntie Susan, with her egg sandwiches, drove us to our destiny.

Miss Miller kicked off straight away:

“Firstly, I want you all to know that there are only winners here today. Although only a few of you will be taking on the big roles, it doesn’t mean that everyone isn’t equally important. Just like a car is made out of many parts and it needs each one to function, we need the enthusiasm and skill of all our ballerinas… and… uhm.. our ballerino.”

Rupert was squeezing my hand so hard that I thought my pinkie was going to pop off.

At this moment, Rupert let his iron grip go to hold his face with both of his hands.

“I can’t believe it, Suzy,” he whimpered, “I’ve wanted to be Siegfried since the day I was born.”

He looked at me as if I had just eaten one of Auntie Susan’s stinky sandwiches.

“Now class, let me begin but remember you are all stars. The role of Princess will go to Mary.”

“Rupert will perform the role of Siegfried.”

“Wolfgang will be played by Tamaryn.”

I don’t remember much else, but what I do recall that every single person had been allocated their character before Miss Miller came over to me, knelt down and whispered:

“Suzy, we thought you’d do really well as the tree.”

Rupert overheard this and proudly announced to the class that there were no trees in the original Swan Lake. Miss Miller threatened that if he didn’t keep quiet immediately she would allocate the role of Siegfried to someone else. This shut him up and he ran away to sulk on Fluffy’s mattress. She then further explained to me that with my specific abilities and balance, a tree would be the best fit.

When I got home; my mom, dad and sister were all gathered around the kitchen table where a pink cake with a ballerina on top of it took centre stage. I had a meltdown, wept on the floor for hours and vowed to give up on life entirely.

A week after we threw the ballerina cake away, Dad came to sit on my bed. He took a present out from behind his back. It was a big, colourful playbook called ‘Create Your Own Stories’ and it had a different theme for every day. You had to use the characters on the left page to write, or draw, your own story on the empty right page.

I replaced Auntie Susan’s lifts and boiled egg rolls with story-creating with Dad on Fridays. And on Tuesdays, Mom took me to drama class where I was never made a tree. So I ended up not participating in Swan Lake; even Mom agreed that a tree costume wasn’t the right look for me.

Rupert did end up moving to Russia, where he is now one of many male dancers on stage.

I guess our journeys were different.